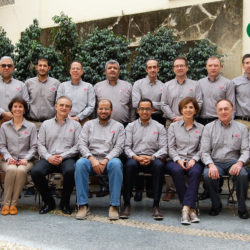 On April 26th and 27th, AISco and its affiliate companies around the world participated in General Meeting for the year 2017 in the historical city of Cordoba in Andalusia, Southern
Spain. The outstanding universal value of the city’s historic center earned it uncontestable recognition as a UNESCO World Heritage Site. The meetings lasted for two days where AISco and
its affiliates had the opportunity to present their performance and forecasts in a collaborative environment.

The active participation of the Heads of the service functions including HR, Finance, Supply Chain, Marketing and Engineering were integral to the discussions held. This ensured that all of the priorities identified by the AISco Group of Companies are integrated into the team’s efforts to turn strategy into action. The group was deeply honored by the presence of Sheikh  Mohammed Alkhorayef, CEO of Alkhorayef Group, and Sheikh Abdullah Alkhorayef, CEO of Alkhorayef Industries, whose support and vision were the cornerstones of this strategic event.